In her third and final blog post Ellen Bell reflects on the last two years of her performance practice.

For the third time I’m sitting in the National Gallery sewing in front of van Gogh’s Sunflowers.

It’s almost two years since I first performed here and it feels very different. Though half-expecting it, I’d still been surprised by my apparent invisibility back then, with my only obvious audience being a small Chinese child who sat entranced for a full five minutes beside me. The second time several people spoke to me, with one Japanese woman utterly delighted by a conviction that I came ‘every day to sew the painting’. Intent on achieving maximum effect, today I have upped my game. Not only have I replaced the small cross-stitch with a large tapestry of the image but am wearing a 19th century-style dress, complete with corset and crinoline.

I find it hard to say exactly why I have chosen to deck myself out as a Victorian. A decision - involving the manoeuvring of a wide and cumbersome skirt in and out of trains and tubes, up and down stairs and escalators, and then out into the wind and rain-soaked streets of London’s West End – that, having worn it since breakfast as a way of ‘getting into character’, has given me hours of discomfort and, indeed, stress. I could deliver a spiel about sewing being an intrinsic part of a Victorian woman’s non-vocal communication strategy but that wouldn’t explain why I am posing as one here, now in 2019. 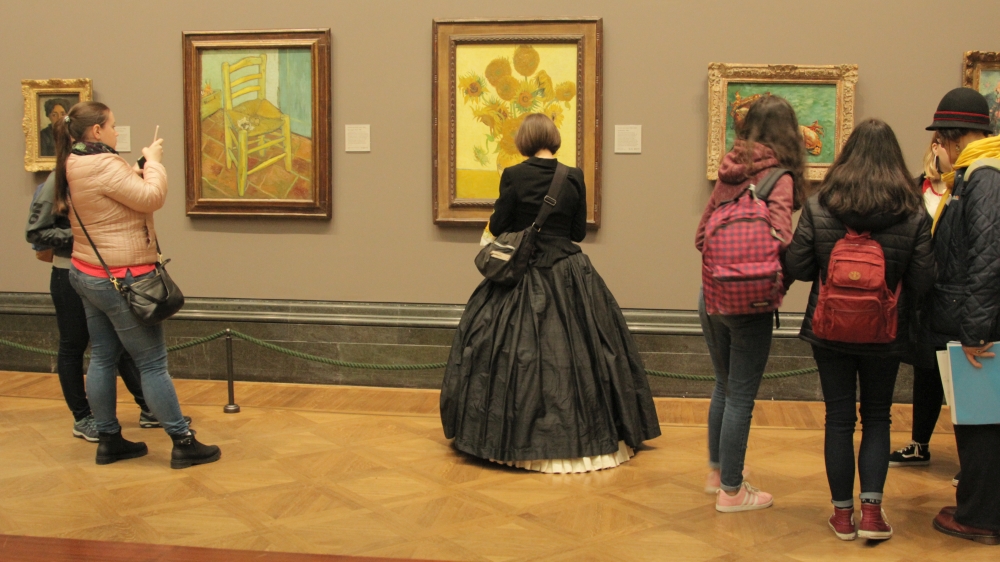 ‘It’s just an excuse to dress up’, said my partner when I first wore the costume for my enactment of Oubliette at Oriel Davies in 2017. And there is no doubt that there is a veiled pleasure for this closet-Victorian in physically experiencing the containing restraint of a corset and ‘crin’. But there’s more to it than that.

I came to performing out of the embers of a practice that had been all about showing – in high-profile galleries and international art fairs. I’d let it go. I’d had to, the crash of 2008 saw to that. And though I don’t miss the constant pressure of making work that sells, I do miss the buzz, the attention, the exhibiting of myself through what I do. For is that not part of any creative process - that calling-out to maybe one other, or many, or even thousands and saying, by your acknowledgement of this thing that I have made, I exist?

I’ve been here an hour now, silently sewing amid the flurries of students and tourists that come and go to crowd in front of the painting. Few look at it: for most it’s yet another Metropolitan sight-seeing opportunity for a selfie. It’s an elaborate, noisy floor-show and I seem to have become part of it. From the corner of my eye I can see the film-maker Magali Charrier photographing me. I’ve commissioned her to do so, undercover - ‘guerrilla-filming’, as she calls it. There’s already been a contretemps between her and one of the invigilators. No filming, I heard him say. There are cameras up there, they’re watching, it’s more than my job’s worth. She’s using her mobile phone now. The gallery visitors start to do the same. Some ask permission, most don’t. 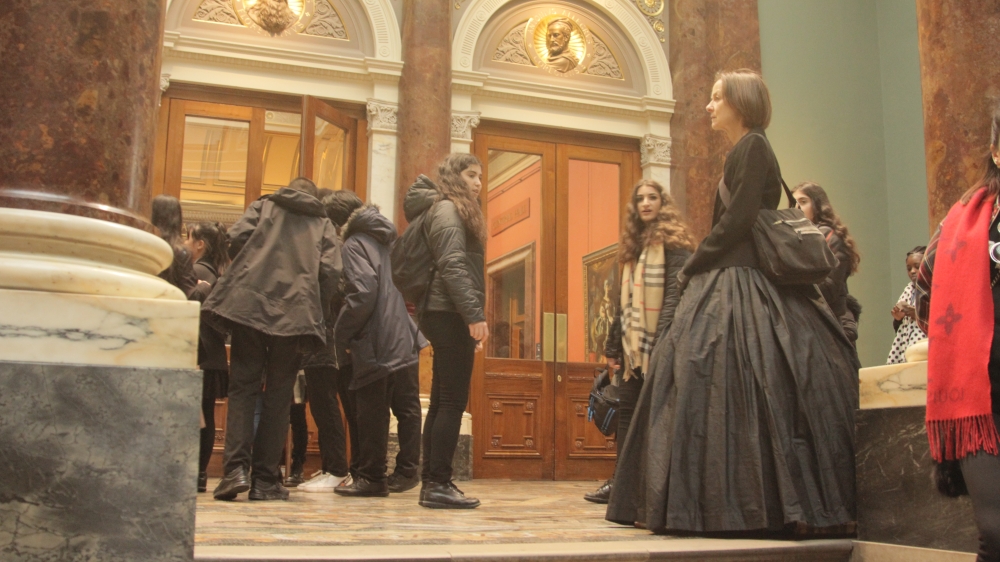 What do they make of it? Wild sewing, I called it as I first began to ply my needle in public places. This particular performance was to be the antithesis of Art – an on-site working of this iconic painting via a needlework kit. Devoid of any creativity or skill, this was to be a symbolic playing-out of my stuck-ness. I imagined derision, laughter – the floundering artist placing herself in the stocks. But there was none. I was taken on face value, all irony lost. You must love sewing, one woman says.

My artist self is still blocked, still stuck. Writing has filled the void, mostly reviews and a non-fiction book is in gestation. I’m no clearer than I was two years ago except for a sense that the maker is fast becoming subsumed by the writer.

Would that be OK? I ask myself as I pack my tapestry away and prepare to leave. Yes, (the word ‘swansong’ echoing in my head) yes, I think it would.

Watch a film of the performance below:

Ellen Bell is an artist based in Wales. Her drawings, installations and sculptures are informed by ideas surrounding intimate communication through the written and spoken word.