An interview with Harlan Whittingham about Quarantine, a process driven, performative exhibition that took part in the Ridings Shopping Centre in Wakefield over the weekend of 27 and 28 October 2018

Introduce yourself and tell us about your practice - how would you describe the work you do?

I am interested in the dynamics and effects of power involved in cultural production and consumption. This interest has led me to explore surrounding subjects, such as -  appropriation, ethical representation, the relationship between colonisation and archiving, and the ways meaning and value are created and transformed by different audiences.

Often this plays out through characterisation, or as a sort of grotesque self-reflexive critique. Sometimes this happens after the fact. However, recently, these types of art making were fed directly into the curatorial project as it developed – the line between the two is constantly blurring. 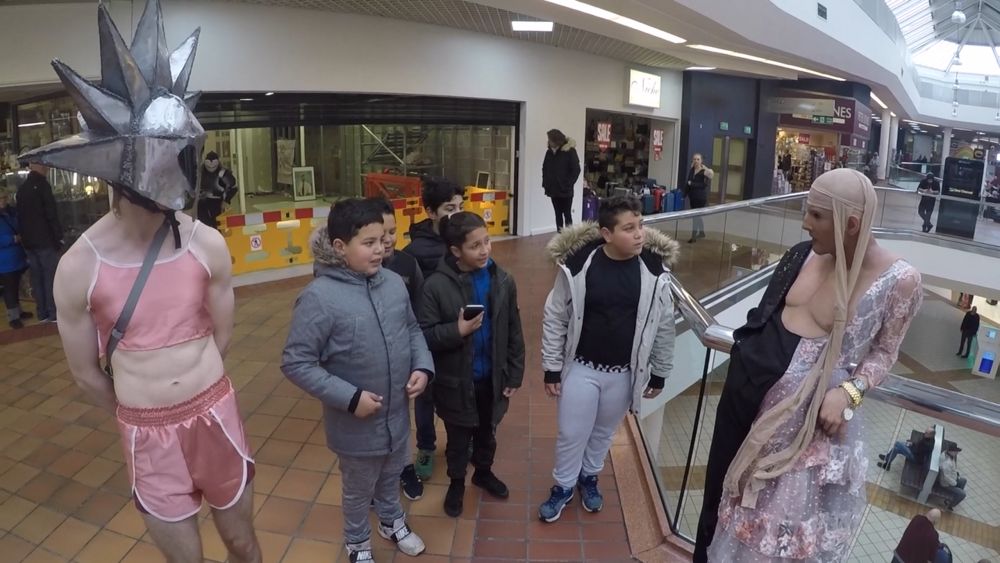 Have you undertaken any residencies before? - if so, what benefits does a residency offer?

In 2015 I collaborated with Benjamin Edwin Slinger on an exhibition entitled Magiciens de la Merde at &Model in Leeds. We begun the process with a game of darts against a world map, which in turn dictated certain rules to follow in the creation of artworks. While not 'officially' a residency, the limited time constraints mirrored that of a residency. Everything for the show was made over the course of about 10 days. I don't think we would have chosen to do something over such a short space of time had it not been conceptually relevant to the project. However, the rapid exchanges we were having definitely produced some great work.

In 2016 I took part in a residency with a group of French and Canadian artists in Nantes, France. While the project itself was less fruitful in terms of the actual artworks I produced, and somewhat stunted by disagreements with the organiser; the conversations between myself and other participating artists were really useful. Sometimes it's quite difficult to force yourself to produce amazing work under a particular set of conditions, but time and space to reflect on what you're doing is always beneficial. 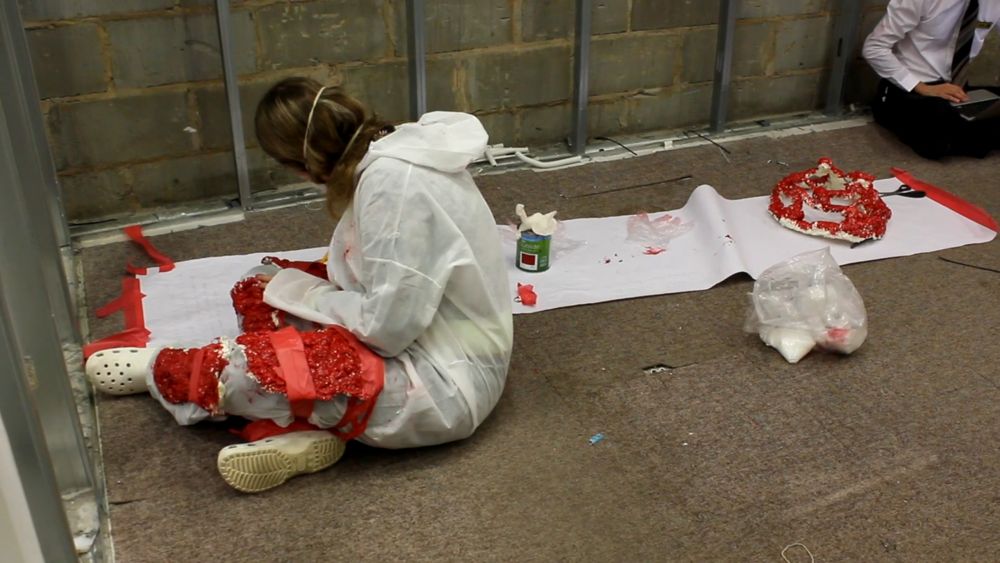 Tell us about the work you developed during your weekend in Wakefield? - how did the residency help you achieve this work?

During the weekend in Wakefield I tested ideas inspired by the curatorial projects of Eric Troncy. These ‘performative exhibitions’ or ‘exhibitions as film’ are process driven and unfold in the exhibition space over a set period of time. I was fortunate enough to work alongside an amazing group of artists that agreed to role play and participate in the scenario I had created - Daniel Burley, Sam Keelan, Jill Mcknight, Jack Pell, Liv Preston and Jenkin Van Zyl. Everyone was extremely committed and generous with their time. I couldn’t have tested these ideas without them.

The project, entitled Quarantine, continued a blurring of my role between artist and exhibition maker. Here I role-played alongside the participating artists, playing a character attempting to document the process. This footage will form a video work and also act as a document of the project. It’s a little early to say exactly how this will develop, but I’m very excited to continue experimenting and developing the work.

Axisweb’s Vacant Space programme allowed me access to various different shopping units in The Ridings Centre in Wakefield. It was really interesting to engage with an audience outside of a traditional art context and examine the ways meaning was created outside of this frame. 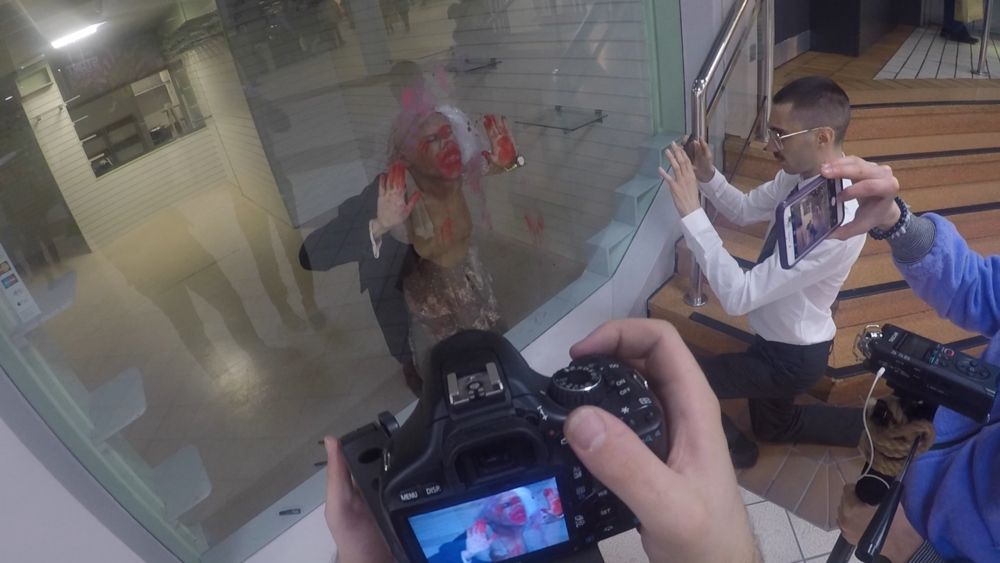 How did people react to your project?

There were loads of different reactions to the project. Some people were really curious and directly approached us to question what we were doing, others hung around and stared at us quizzically; of course, a larger group ignored us completely.

Due to the experimental nature of Quarantine there was little presented in way of a traditional 'exhibition', and as I mentioned earlier, the project didn't take place in a gallery (Ironically, we were actually situated directly opposite a shop selling paintings called “Art World Gallery”) I wondered if people were more likely to engage with us as a bunch of weirdos acting up in a shopping centre, rather than as a group of artists creating Art - and all of its associated pretentions.

I later found out that the shopping centre had received a number of complaints about the costumes (or “lack of”) and questioned their suitability for a “family shopping centre”. I'm surprised that the costumes really offended anyone, but perhaps this also highlights the way Art institutions and audiences so easily assimilate anything shocking or transgressive. I don't think anyone, with or without children, would have batted an eyelid if they had knowingly experienced these costumes within an Art context. 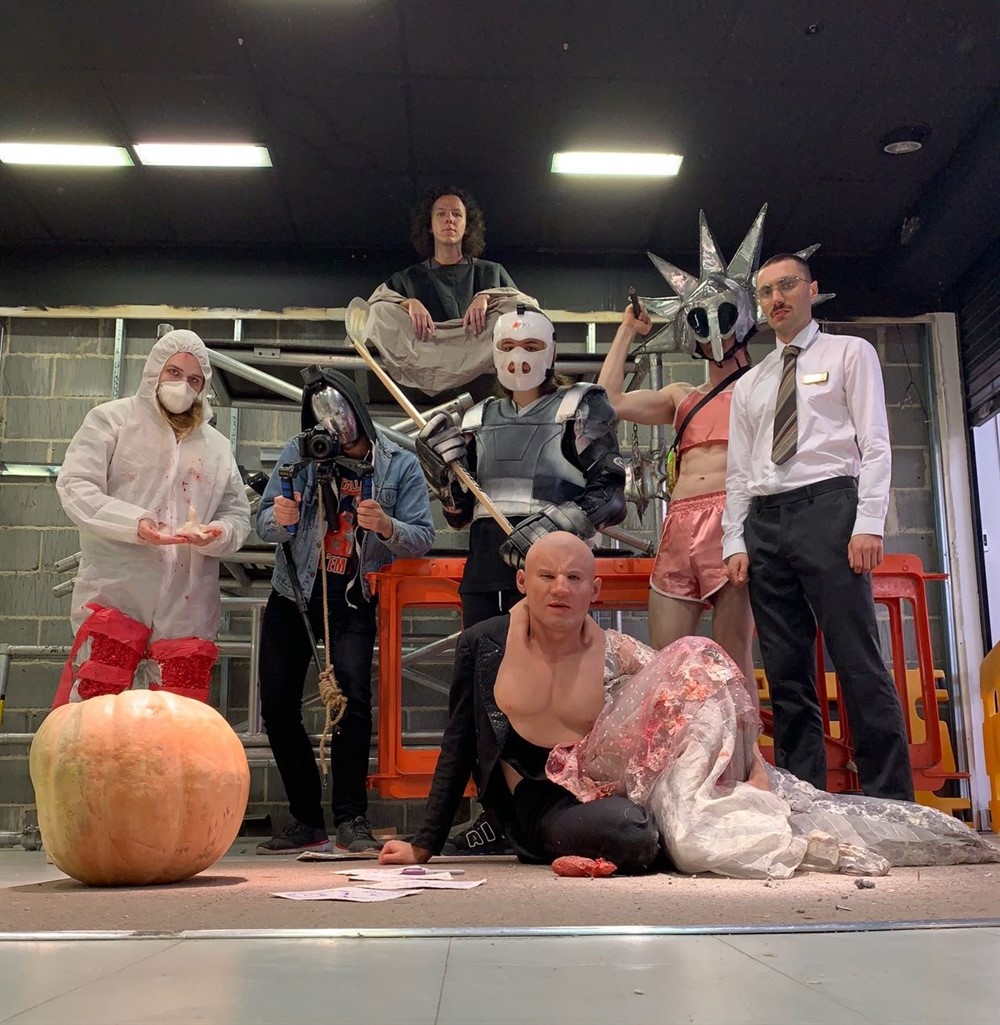 What other projects have you got coming up?

Earlier this year I was accepted by the Tetley in Leeds as part of their Artist Associate Programme. During my time on the programme I'm revisiting and continuing to develop a body of work surrounding the character of The Collector. The Collector intersects themes of horror and desire, characterisation and the relationship between subject and object.

Outside of this I'll be continuing to work on the video and documentation of Quarantine. I'm sure this process will help me expand on my ideas and develop other strange exhibitions in the future.