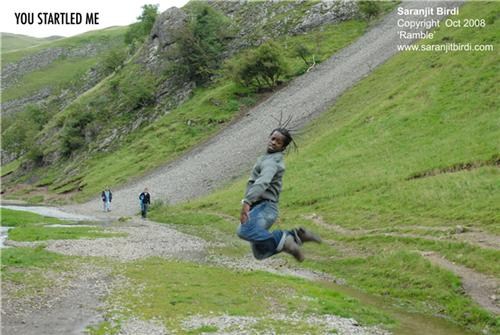 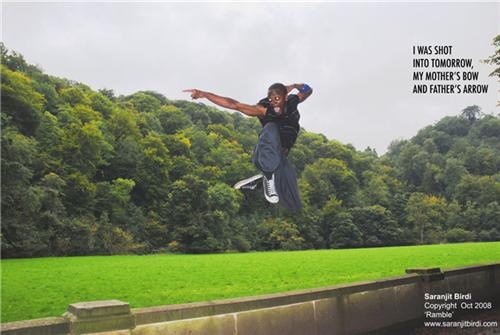 Introduction
‘See, Saw’ Shire Hall Gallery, Stafford 2008 was an ensemble of photographic and video works ‘Ramble’ and ‘Interrogation’, which explore the outer and inner worlds of freedom, territoriality and stereotype. The historic courtroom of the Gallery inspired the installation of the works.


With a British-Indian origin, ethnic diversity features in my work. ‘Ramble’ was created under the British Summertime Commission in 2007 and explored the lack of black people visiting the English landscape. A group of black dancers visit a National Heritage site on a ramble whilst reflecting on being British and assimilation. The walk and dialogue were documented and created into the final work.

Artist Statement
For the last few years I have made regular countryside rambles and was always amazed at encountering very few Black or Asian walkers. A white friend told me that she was the recipient of a racist comment made by an acquaintance, a wealthy, retired, English businessman. After he had been rambling in the Lake District he commented that, ‘It was like England used to be.’ Meaning, she said, no Black or Asian people to be seen.

This comment reminded me of exclusion from another place, nightclubs. I have been part of a predominantly Black jazz/urban dance scene dating from the 1970’s. It was often the case that Black and Asian people were not allowed entry on the popular nights because most clubs had percentage quotas. Paradoxically, people have often assumed that as an Asian dancer and percussionist I danced Bhangra or played tabla. In fact my passion has always been Jazz-Street-Contemporary dance and Latin percussion. I normally have to reply ‘I don’t dance Bhangra’ to dispel the stereotyping. The most iconic and defining scene of a Bollywood movie is the dance sequence on a mountaintop or in rural wilderness; the countryside is escapism for Asians.

I, therefore, decided to go on a ramble with a group of Black street-jazz dancers, friends for many years, whilst discussing the meaning of freedom and being British. The ramble was recorded in photographs and video; at times juxtaposing dance poses against the spectacular summer landscape and interacting with other ramblers. The resulting visual artwork is a series of photographic montages, incorporating text and extracts of conversations and song recorded along the ramble; experiences of social exclusion, inclusion and British summertime. The text accompanying the images ranges from poetry through to references to literary characters and the works of ancient, Greek playwrights and philosophers. The words are also metaphors, which play on the dancers’ movements and locations on the ramble at Ilam Park, such as ‘Target Meadow’, a feudal archery range and ‘Lover’s Leap’, a cliff edge. They allude to falsehoods, identity, territories and territoriality.

The ramble was an amazing, positive experience for the dancers and myself.
In the oscillation between what we see and what we saw, the audience are asked to reflect on what lies behind appearances, in the interrogation of truths and search for freedom – ‘See, Saw’.