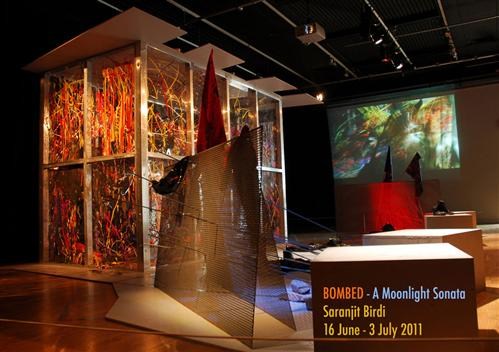 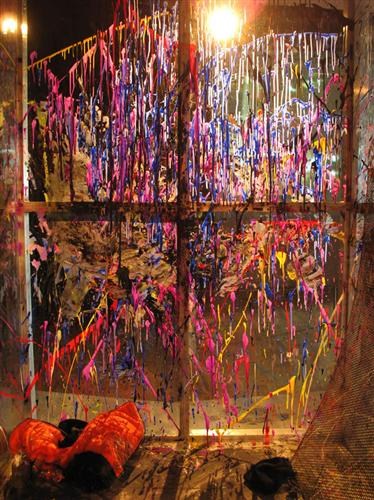 Bombing and being bombed are among the world's major concerns. Territory building - whether geographical, economic or social - still remains a preoccupation. Through a synthesis of sound, paint and improvised dance, this
installation and performance work explored several refrences, primarily the 1940 Coventry Blitz (code named by the Germans 'Moonlight Sonata'), code-breaking and contemporary geopolitics.


This installation was a major milestone in my arts practice. I tried to exploit a fusion of art forms involving, sculpture, painting, live dance performance, film and music to explore the narrative of the Coventry blitz and current fears of terrorism and bombing. It was an opportunity to play with musical composition in conjunction with action-painting and movement.

I have been exploring the themes of conflict, war, violence and territory building for some time. I selected three street dancers/martial artists who I have known over the last ten years and who I knew would respond to live, improvised performance with very little rehearsal as the musical and performance language here was common to all the performers. The dancer's, apart from Winston, had never experienced action-painting prior.

I worked at a very detailed level in the design and construction of the set; the overall lighting strategy and choreographic concept. However, I allowed some freedom for the performers, lighting engineer and cameraman to improvise on the night of the performance, as it remained unrehearsed. This was in order that the energy of rapid decision making, gut instinct and focus were of primary importance as the event was unpredictable and unrepeatable and echoed a situation of a possible, imagined reality of war.


This project was supported by Coventry Artspace, Arts Council of England and the Herbert Art Gallery and Museum