Maru Rojas reports back from the Engage Conference 2017 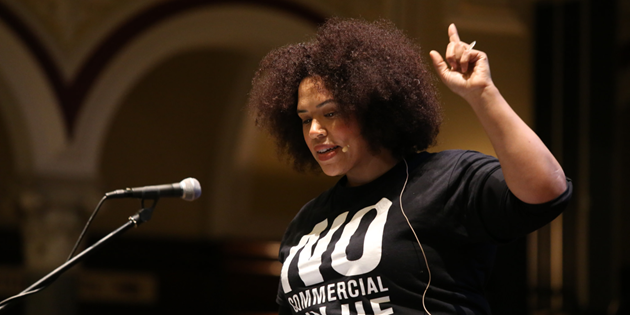 The annual Engage conference took place in Hull on the 29-30 November 2017. Titled The Whole Picture: Rethinking Diversity? The conference explored and reflected on issues of inclusiveness, diversity and cohesion at a particularly turbulent time, and asked how can the arts can best respond to this. Our guest blogger for the event was artist Maru Rojas.

Gender:
Female, Cis-het
Occasionally non-conforming. Has no issues with the pronoun she, has issues with normativity.

Invited to the conference as one of MK Gallery’s artist facilitators.

Paid £150 to write this text, which covers the cost of the shared Airbnb (£65), the return train journey (£45) and other minor expenses (breakfast, snacks, coffees £35) 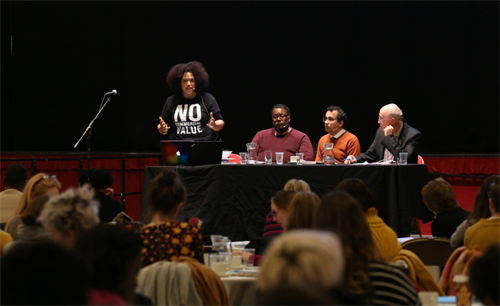 I’ve tried several times starting from the beginning, but the beginning keeps bringing me back to Wittgenstein’s final sentence in the Tractatus Logico-Philosophicus.

Because, what is the whole picture? What is diversity? And if we can’t define these two things, how can we talk about them?

I waited a few days to let the dust settle before sitting down to write. My intention is not to name and shame, but to reflect upon what I learnt or found useful.

I am left with the sense that many speakers came armed with the requisite power-point slide show to talk about diverse their projects are and the great things they had achieved. Thankfully, there were those that spoke from a personal place, who pointed the short-comings while celebrating the achievements, who were aware of their own lacks and limitations but were actively doing something about it. These speakers offered the few solutions and practical actionable strategies that I found most poignant.

A few speakers at the conference conflated diversity with inclusiveness and started from there, but that strikes me as somewhat problematic. Inclusivity is often related to becoming part of a group, part of a whole. But then the question is whether this leaves no room for diversity and favours a normative, universal, whole. If we are included, are we all equal? Diversity is on the other hand, in a broad sense but also in a literal sense, a range of different things.

Too specific and it’s not diverse, too broad and it dissolves away.

No one wants to be un-diverse. Whether publicly funded or not, it is a widely recognised aim to be or become a diverse institution, workplace or project. However, acknowledgement and aiming towards it is a very different thing to the reality, where the institutions set to deliver diversity are not diverse themselves.

Rommi Smith, who pointed out that we’ve been having the same conversations over and over again, for 20 years, best described this lack of diversity from the top-down. Here she was, yet at another conference attended mostly by white middle-aged women, the “comfortable club” (hey, at least the environment wasn’t male dominated for a change!). And herein lies the root of the problem.

As an artist & facilitator I must also say that I expected more colleagues to be present. We are, at the end of the day, the ones at the forefront, planning and delivering and dealing with audiences. Self-employed and often under-paid, must of us can’t afford to pay for a conference ticket, plus travel & accommodation (plus missing out on paid work). So I have to thank MK Gallery for being the only institution there present, who invited a group from their pool of artists. I’ll put the suggestion out there, as a way of broadening the conversation and being more directly actionable, that Engage and the attending organisations could come together to co-fund 1 place per organisation for their self-employed artist educators to attend. (As a side note – I am often the only or one of the only non-white people amongst groups of artist facilitators. There’s something to think about if we are the ones directly dealing with audiences).

From my part, a special mention goes to The Collective Liberation Project for their practical and hard-hitting breakout session (Introduction to power, privilege and anti-racist practice). Some of the attendees complained that it was too much, too soon, too direct. The reality is that for non-normative people, life is more often than not too much, too soon, too direct. It is widely acknowledged that in dismantling privilege, those at the top will be made to feel uncomfortable. If institutions truly want to embrace radical diversity then it’s time to create new narratives, even if they make those at the top and in strategic positions feel like it’s too much, too soon. It’s never too soon.

Maru Rojas's  practice spans live art, writing and education and centres around forms of language. She has recently exhibited at Guest Projects, Shaped in Mexico and at the Art Licks Weekend. She has written for This is Tomorrow, HOAX magazine and COPY.